So excited, guys! First of all, I’m  never excited about a Final Exam. Ever. Basically most of my time is spent disliking assessing and the other part is trying to figure out how to make assessments easier for me and less painful for my Little Darlings. EUREKA! I’VE GOT IT! I’m so pleased with my Spanish 1 final and I’d love to share it with you!!

Backstory: We’ve revamped our department grading philosophy and policies to focus on the 4 language skills and tie everything to ACTFL’s proficiency levels. Nevada says that at the end of Spanish 1, our kiddos should be at “Novice Mid”, so for our department, if a student is at the state’s target, that should translate into a B on their report card. If they’ve moved past “Novice Mid” they should earn an A, and for those who are not quite there yet, they should earn a C. Here’s a post all about our “new” policy and a letter explaining it to parents, if you’d like more details!

Thus, our “Celebrations of Knowledge”, aka tests, assess the four skills: reading, writing, listening and speaking, and the grading aligns with this philosophy. However, final exams have some special considerations to contend with: we can give a portion before the exam day, but we can’t give their entire final early…students MUST complete their final on the scheduled final days. Additionally, that last section of the final must be easy and quick to grade because, our last day of school is INSANE: finals in the morning, then grade them and enter them into the book, finalize report cards, check out of our classrooms for the summer then participate in the graduation ceremony that evening. (Oh, and if you’re Señora Chase, hop on a plane early  the following morning, heading for the Yucatán 🙂 So, you see what I mean, those babies have to be EASY and FAST to grade!

I don’t like speaking grades in Level 1 because, hello, they need input and not output! But…after a whole year of input, it’s time for them to show me what they can do…in a really low stress sort of way.

My dear colleague Karl inspired this idea and I will be forever grateful to him! (And I’m just heartbroken that he will be transferred to another school in our district because he is SO FUN to work with and such a great advocate for students! and I’m going to be looking forward to the day when he’s back teaching at my school!)

He calls it “Speed Friending” and the classroom is set up with an inside circle and an outside circle facing each other.  The teacher stands in the middle with a clipboard with the Speaking Assessment Checklist ( Here’s a free copy of the Level 1 checklist….here are the Level 1-4 checklists for purchase. ) 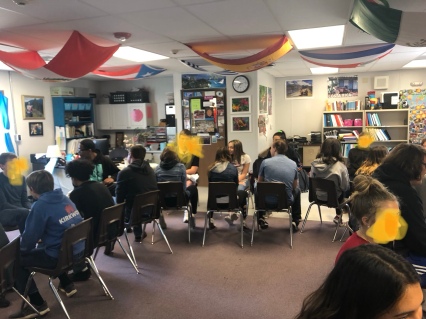 I projected this slideshow with “Topics” from Spanish 1…basically the themes we talked about, the movie talks we did, our Copa Mundial tournament and Locura de marzo and all the other fun stuff we discussed this year, like the dead rabbit in my living room. (Feel free to use  my slideshow, but of course, you’ll want personalize it to your classes 🙂

Instruct your kiddos: The people in the big (outside) circle will be assessed- they should tell their partner as much as they can about the topic on the board, in Spanish, of course! (Why do kids ask that?!?)  The students in the small (inside) circle are helping their partner by asking questions and responding with the rejoinders we’ve been practicing all year, but they’re not getting assessed.

While students are chatting with each other, I circulate with my clipboard, marking when they fall on the rubric. Woah, full sentences, recombining words to create new ideas, that’s an A for you, buddy! For each topic, I listened to 2-3 students and marked them on my clipboard.

I found that it was easier for me to assess the outside circle kids rather than the inside circle kids- originally I planned to listen to the inside circle kids because they are closer and I thought it would be easier to hear them, but it was hard without seeing their faces, since I was inside the circle and they were facing out. Play around with it and see what works best for you!  And since I’m mostly only listening and not really responding to students, I was able to listen to 2 kiddos at once (#supertalentosa) and mark them down both at the same time. Never have I had so much fun scoring finals!Wr

After every topic, one circle rotated one spot, so everyone had a new partner, I projected a new topic and away we went! After a few rotations, I had the students swap: the inside circle kids moved to the outside circle and vise versa. The clipboard made it easy to see who needed a grade and to intentionally search them out and listen to them during the next round. We did this for about 20 minutes, got though 9 slides, and I got 2-3 measures for every single kid. SO FAST, SO EASY and kids were

enjoying themselves, chatting with their partner, laughing and high-fiving each other. I’m not even joking, it made me tear up a little bit, watching them go to town with all the Spanish they’ve acquired! AND NO ONE WAS STRESSED OUT!!!

On the rubric, check marks mean a good solid C, B or A, depending on the column. The + and – indicate a high  or low C, B or A. And the best part, they’re already in alphabetical order (names are under the blue paper) and it will be a cinch to enter the grades into the gradebook!

I’m planning on doing the same thing next class, with the rest of the slides we didn’t see today, just to confirm the grades are accurate (I’ll use a different color on the same rubric) and to catch the absent students.

Hard to visualize? I got you covered!

Update: I wrote a whole post about these Low Stress Speaking Assessments, if you’re looking for some light bedtime reading.

I wanted to give this portion early as well, to have time to grade them. To entice the inside circle kiddos to listen to their partners, I told them that their writing final would be to report what they learned about their partner. After we did the “Speed Friending” speaking portion,  they had 10 minutes to write about their partners. I was impressed, some kids went crazy and wrote A LOT, a paragraph per partner that they talked to.  After they wrote, I told them that we would do the same activity (speaking then writing) next class, and then they would start their “better” writing sample for me to grade. (They think it’s me being gracious and generous, but really it’s because I don’t want to grade 2 writings from each kid!) And I told them that if they were really impressed by today’s sample and they want me to grade it, to star it and they don’t have to do the writing next class. Which was a sneaky way for me to get a jump start on grading them 🙂

And speaking of grading them, they’re so fun to read, because everyone wrote about something different (so they’re not boring to grade!) Here’s the super simple rubric I’m using. These kids are cracking me up…especially this one, which I just HAD to tweet to my “novio”:

These will be given on the last day of school, and so they’ve got to be lightning quick to grade. Usually I use these ACTFL Interpretive Quick Quizzes to assess reading and listening but there’s just not time for our finals, so I’m going the Scantron Route. And before you get all judgy, relax! They’re going to get a lot of input, and show me what they can do AND it will be quick and easy to grade!

I’m not going to post this portion of the exam, because I think my little darlings are sneaky enough to scour the internet and find my test! But I’ll show you a few samples.

Listening will be pretty basic: I’ll read a few statements and they’ll decide which picture I’m describing. They’ll listen to a few statements and decide if that was a logical or illogical. Like, I love to eat pencils, they’re so delicious!  and finally  they’ll have a story to listen to and respond to a few true or false statements.  Nothing earth shattering, but it will do.

For the reading portion,  I wrote little vignettes for them to read, about all the fun things we’ve done this year, including the movie talks we did.  Each little paragraph has 5-6 blanks and students will read and figure out which word makes sense where. Is it the best way to measure how much they’re understanding? No, but, it’s a good compromise and I’m happy with it. I including screenshots to jog their memory from this year’s MovieTalks: 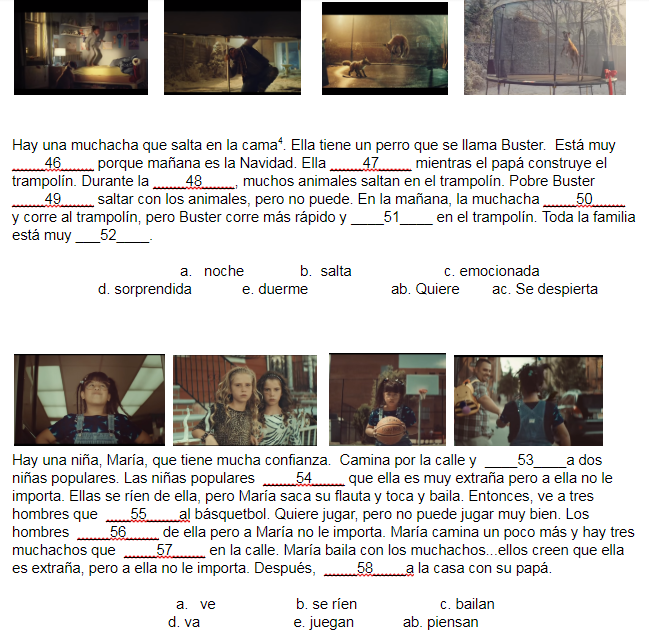 I’ll be able to get those babies graded and entered in NO TIME!

Cute Baby Animals: Before we begin the final exam (on the designated Final Exam Day), I show them a slide show of Cute Baby Animals.  Years ago I read study that suggested that looking at pictures of cute baby animals reduces stress and increase attention and productivity.  So, I figure, can’t hurt, might help! And besides, it’s fun. And then I show them some ugly baby animals (no study has confirmed that looking at ugly baby animals does anything for anyone, but it makes them laugh!) Then we start out Scantron final.

Write a letter: After kids finish their final, I ask them to either, write a note to me about their experience this year OR write a note to an incoming Spanish 1 student. I like to start out the year sharing the former students’ advice 🙂

Help a sister out: And, then I ask if anyone wants to help me when they’re finished with their final, to let me know. I have a list of jobs that students can do quietly that will help me out while other students are finishing their final and I assign jobs to students who will be able to work efficiently and silently.

Here’s a post with my “Study Guide” and some ideas for “preparing” for their Final Exam.

The final countdown is on! We have one more week then finals! How about you? Are you rounding the final corner or do you have a ways to go?

Wishing you a happy and strong finish to the school year! 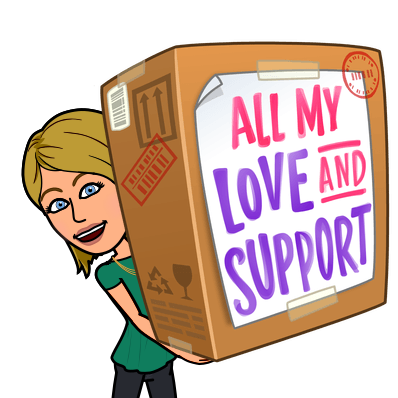