You guys! This is so fun! This might be my favorite (and newest!) tradition! I’m typing this exhausted, sore and over-the-moon happy during my prep period between back-to-back soccer games.  Deep breaths… let me start at the beginning.

We have a new teacher this year, Karl, who comes to us from another rural Nevada district. We’re happy to have him join our department and we’re especially happy that he brought a beloved tradition with him from his other school. He encouraged us to plan soccer games between our classes as a community building event. In his words, “we will get a lot of mileage from it in terms of morale and camaraderie”. Boy, was he right! (And just so no one is worried, we checked with our principal who enthusiastically supported it!)

So we ran with the idea…we assigned each language teacher (5 Spanish, 1 French and the ESL teacher!) a professional soccer team and organized a Copa Mundial to span 2 days, with each class matched up with a different class. (So, 1st period only played 1 game, against a different 1st period class…but their win adds to their team’s overall ranking. So Mrs. Chase’s Class (Los Rayados from Monterrey!) played against Mr. Watts (Fútbol Club Pueba) 1st period, and against Ms. Rice (La Asociación de Fútbol Argentino)  2nd period and against Mrs. Porras (Fútbol Club Barcelona) 3rd period and so on…

Of course we wanted to milk this for all it’s worth, so we really talked it up leading up to the event…in slow comprehensible Spanish, obviamente. I made this slide show for my Spanish 1s introducing the event and our team and taught them the team song. Every class leading up we chanted Monterrey (clap, clap) Monterrey (clap clap) and ¡Dale Rayados! until the class on the other side of the portable responded by belting out the Argentine Soccer Fight Song. (Really, I can’t imagine why they moved the entire language department out to the portables…)

On the day of the event we taught a regular lesson for about an hour (we’ve got block periods, remember!), then students put on their “jersey” (really just a 1/4 sheet of paper with their team logo on it taped to their shirt!) then we went out to the soccer field for the last 40 minutes of each block. We played for 15 minutes, had a short half-time water break, then played for 15 minutes more. We had 2 games running simultaneously, each game taking up half the soccer field. (We added 2 additional movable goals) The teams were huge, like 32 kids against 29 kids, and we all just ran around like maniacs. Nearly everyone played, a few held flags and chanted from the sidelines. One kid brought his snare drum from marching band which was especially awesome and hilarious. A teacher brought her Bluetooth speaker and blasted her team’s anthem. It was mayhem and it was incredible. 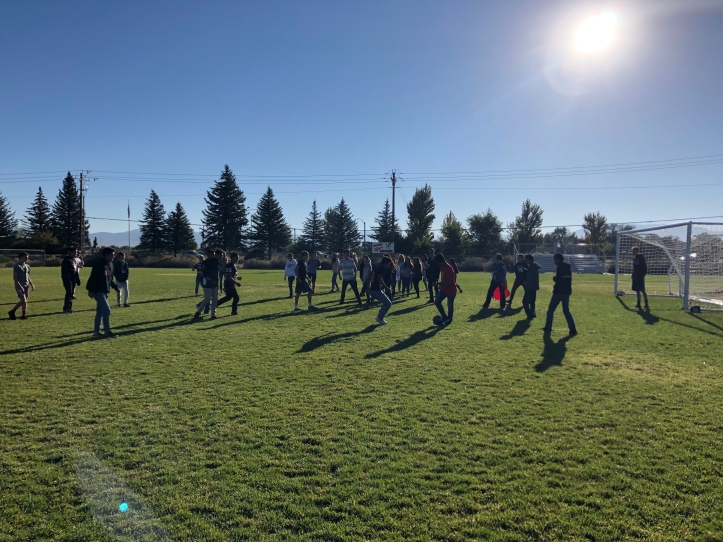 Of course each teacher was the coach and we dressed the parts. (I’ll admit, I stayed up late making  coaches t-shirts with our last names on the back! I just happened to have Printable Iron On Transfers

. Totally unnecessary but I’m a little ridiculous like that.) Oh yeah, I also ordered a FC Monterrey Flag

from Amazon (Also unnecessary… You guys have been clicking on my Amazon links so I figured those associate commissions should go right back into my classroom!)

Out on the field we lead our “teams” in jumping jacks (counting in our language, of course) and chanting before the game. At half time I reviewed our strategy (1. Mete goles   2. Bloquea   3. Gana) and high fives all around. During the game I  cheered a lot, played a little, and every time my “team” scored, I threw my hands up, and yelled “¡GOOOOOOOOOOOOOOOOOOOOOOOOOOOOL!” while running around the field high fiving every kid in my path. (That’s why I’m real sore today and can barely move…I’m getting too old for this!)

We also made a shared document to use in our department with the World Cup Rankings. Each teacher was responsible for adding to their overall score after each game. We decided: 2 points for a win, 1 point for a tie, 0 points for a loss. Ours looked like this and it was great to recap at the beginning of every class the  rankings  in slow, comprehensible Spanish!

Yes, we got some language mileage out of the tournament. And yes,  we touched on the Cultural Practices and Cultural Products Standards. But really, the real value was in the community building…there were too many golden moments to share, but here are a few:

You guys. It was so good! We’re already looking forward to our rematch that’s scheduled for May. And we’re going to  ask the welding class to make us a trophy because this tradition is going to stick around.