Is it safe to say we’re all back to school? Are there any lucky holdouts who don’t start school until after Labor Day? I hope you are soaking up every last minute of Summer!  I’m well into Week 3 and this is the first chance I’ve had to catch my breath and sit down to write. We’re off to a good start, but my goodness, it has been busy! So far, so good…really nice kids, no behavior issues (yet!) and my university Method’s class starts on Thursday! I hope those big kids like me!

One thing I’ve been having lots of fun with lately is Padlet, which is sorta like bulletin board that students can post pictures on. It’s an awesome  collaboration tool and it’s even awesomer because it’s free!  (And I’m  really cheap!)  I asked my Spanish 4 Little Darlings to post a picture from their summer  so we could talk about it in class.  Basically we’ve been Picture Talking their summer pictures, which has been great to build community, get to know them and assess their listening and speaking skills all at once.

I created a Padlet  board and linked it to my google classroom. Students then clicked on the link, uploaded a picture, then titled their picture with their name (which I covered with yellow to hide their names, but in real life, they’re there!). (Holy Moly, their, they’re and there all in one sentence- Bonus Points!)

We’ve been doing a little bit of Picture Talk every class, reviewing the pictures we’ve already discussed, making comparisons between pictures and then selecting a new one to feature each class.

In Spanish 1 we’ve been hitting Has and Wants hard with the Jolly Rancher lesson and I thought it would be fun to do a Padlet Picture talk about their pets- invite students to post a picture of a pet they have OR post a picture of a pet they want. I got really excited about this idea, envisioning all the great discussions with their furry friends projected for all to see,  so I went to set up 2 more padlets for my Spanish 1 classes, but alas, the free padlet subscription only allows you to make up to 3 boards…and I’ve got two going for my Spanish 4 and I need two more for my Spanish 1s! And, have I mentioned, I’m really cheap?!  I’ll have to hold off on the Pet Padlet Picture Talk until I finish up the Spanish 4s, delete the boards and then create the ones for Spanish 1. But doesn’t that sound fun?! Post a picture of the pet you have or the pet you want! If you have a chance to try it before I do, let me know how it goes!! 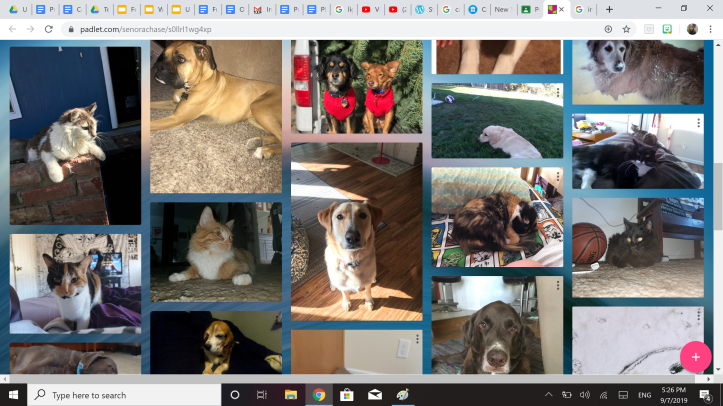 Speaking of Spanish 1….isn’t the start of the year so great?! I’m loving the honeymoon period when everything is brand new, and everything Señora Chase says is hilarious and everyone is well behaved and attentive and participating. It’s challenging too…especially staying in the Target Language when there just so much they don’t know yet!! I’m pulling out every cognate I can think of, but sometimes there just isn’t a cognate to get the job done, so I made these sweet little posters to help me stay in Spanish, while giving instructions to my kiddos. I put them in plastic page protectors and keep them within arm’s reach on the board with magnets. When I’m giving instructions, it’s easy to grab the one I need, show it to everyone while I’m explaining, in Spanish, what they should do. It allows me to tell them “Hablen con sus compañeros” or “Escuchen” or “Escriban”…words they haven’t acquired yet…without breaking into English. If something like this would be handy for you, and you’re thinking, hey, I’ve got $2 burning a hole in my pocket and I’d sure like to buy those sweet posters from Teachers Pay Teachers and I really like Señora Chase and I’d like to contribute to her early retirement fund, we’ll here you go! (And if you’re just as cheap as me and want to make them- think of the most common things you tell your students, type it out really big, slap a picture on to aid their comprehension, and voilà! You saved yourself 2 bucks!)  And if you’re heading over to TPT anyway, check out my Opinion Posters, because what teenager doesn’t love giving their opinion?!

Hope your school year is off to an outstanding start!