Making Star of the Day even more awesome!

Star of the Day, AKA Special Person Interviews are awesome. If you’ve not implemented them yet, don’t wait another minute! And if you’re already rocking and rolling with them, I’ve got a few tricks to make them even awesomer!

But first, a tiny bit of background:

Special Person Interviews are Bryce Hedstrom‘s brain child and he first introduced the CI world to them. He’s written a lot about them on his website:

While this was Bryce’s idea, it was Michele Whaley’s  NTPRS session in Reno a few years ago who convinced me that “Star of the Day” would engage my students. Her explanation helped me visualize it in my classroom. I just love gleaning wisdom from Michele and I thought, if she says it’s THAT awesome, I better try it out!  I’ve adopted Michele’s name, because I’m all about teaching my kiddos new words and my kiddos didn’t know estrella  so I decided to go with that. But no matter what you call it, you’re going to love it!

Basically it’s doing what we do: giving our students lots of slow and rich language they understand while at the same time highlighting a particular student, The Star of the Day. The great thing is the repetition of 2nd person questions and 1st person answers, which they are exposed to all year long.

The powerpoint I use is a collaboration between my dear friend Rita Barrett and myself and she gave me the green light to share it with you fine folks! You can thank her by dropping by her Teachers Pay Teacher’s store, Siempre Positivo or by adding her novela Libertad to your Free Reading library!

Chinese Star of the Day Slide Show, thanks to Yu-Ming Cheng

If you’re feeling generous, and would like to translate it into the language you teach, I’d love to share it here! Hit me up!

How we do Estrella del día:

2. Back in August, I assigned a “Secretaria de la Estella del día” who is in charge of keeping track of who we’ve interviewed and the questions we’ve asked. I printed out a spreadsheet with students’ names on the left and a bunch of blank columns and put it on a clipboard hanging at the front of the room. During our Estrella del día interviews, my secretary grabs the clipboard, writes the questions across the top (as we ask them), and gives students check marks as we ask them those questions. At the conclusion of the interview, the secretary awards our star with a star sticker, of course!

3. The slideshow has about 20 questions… we don’t start with 20 questions from the get go! The first time we interview, I’ll only has the first 3 or 4 questions, which are super basic…What’s your name? How are you feeling? Where do you live? What’s your social security number and credit card information? (JK!). Then after a few interviews with those, I’ll add in the 5th question. Then a few days later add into the 6th question.  As the questions progress they get more complicated. We slowly add in questions to maintain students’ interest…which is why the Secretaria has a critical role. The students who are interviewed at the very beginning of the year are asked fewer questions, so we’ll go back to them at the end of the year to re-interview them.

4. No one HAS to be the Star of the Day! It’s totally optional, because it’s not really about outputting the answers but more about giving everyone else lots of repetitive input. I ask for volunteers OR use my Magic Cards to randomly select a student and ask if they would like to be the Star of the Day. They are allowed decline. We’re all about keeping their affective filters low and the input high around here.

5. Estrella del día isn’t supposed to be stressful! It’s not a speaking assessment. It’s not to see how much they’ve acquired. It’s a vehicle to deliver more input to the class. The slides have the questions and answers written in Spanish and English. The English is there to make the kiddos feel comfortable, a safety net of sorts. And it allows us to start Star of the Day at the very beginning of Spanish 1. You don’t have to pre-teach any vocabulary.  I repeat, this isn’t supposed to be stressful!! (For YOU or THEM!)

6. We don’t do Estrella del día every day, but you could. I have it on my lesson plan as the last activity almost every clas, and someday we get to it and some days we don’t.  Some times we have time to do 2 Stars of the day. I love it that I always have it ready to go, if I need a filler. Just know…there are no hard and fast rules. Do what works for you!

And how do you make Estrella del día awesomer?

While I’m interviewing, our star is answering and the students are listening carefully. Whenever the Star says something that applies to students, they shoot their hand up and exclaim “¡YO TAMBIÉN!”.  So for example, our Star tells us that her name is Hailey. The Other Haley in the class raises her hand and says “¡YO TAMBIÉN!” and then Star of the Day Hailey jumps up and gives The Other Haley a high five and they both say “Chócala”. Our Star of the Day says he’s tired, and everyone who’s also tired yells out “¡YO TAMBIÉN!”, and he runs around the room high fiving everyone who’s hand is raised.  Our Star of the Day was born in Nevada. ¡Qué casualidad! Most of the class belts out “¡YO TAMBIÉN!”  and the Star makes the high five rounds.  Since I’m all about input, all the time, while the star is high fiving, I’m narrating: Joe también tiene dos perros. Y Will tiene dos perros, y ¿Cody, tienes dos perros también?  The high fiving goes fast and it’s a little bit chaotic but it makes it really fun, and I love it drawing students’ attention to their similarities and making connections within my class. (If we have a low energy Star of the Day, I’ll allow Long Distance High Fives, where she stays in the special chair and does the motion with everyone’s raised hand….you don’t want to force a kid to get up and high five everyone because they’ll move at a snail’s pace and it will be painful for all.) But seriously guy, the ¡YO TAMBIÉN! addition makes it so much fun! ¡Chócala!

2. Change up how the questions are asked. At the beginning of the year, I ask the questions to our Star of the Day. The student answers, then I summarize the information back to the class. It sounds like this:

Señora Chase: ¿Cómo te llamas? (As I am pointing and pausing at the words, giving the Star time to read the translation below it).

(Flip to next slide)

And so on…The important thing is to listen to the kid. Ask follow up questions. Report the information back to the class. And keep it moving so no one gets bored.

After a couple of weeks, I will signal with my fingers 1, 2, 3 and when I point at the class they will ask the question o the slide in unison, then the student answers, then I recap the information and ask follow up questions. Once they get over that, further in the year, I’ll ask for a student interviewer. That’s fun for a couple weeks, but then we need to spice it up a bit. That’s when I bring out the microphone. It is so fun to have students do the interviews with a microphone like a news reporter! I found an old garage band microphone at a thrift store, and it is one of my most beloved props. It’s not even plugged into anything but it’s just so much fun!

The important thing is to change it up so kids don’t bored with Estrella del Día.

3. Star of the Day interviews are not only for students! One year my mom came into class and we interviewed her. Today our security guard dropped by and graciously allowed us to interview her. Next week my principal is scheduled to come by for an interview which will certainly be hilarious because he’s a funny guy AND he has the best worst Spanish accent of all!

And that’s how we do Estrella del Día in my class! I’d love to hear the tricks you use to spice it up in your classes! 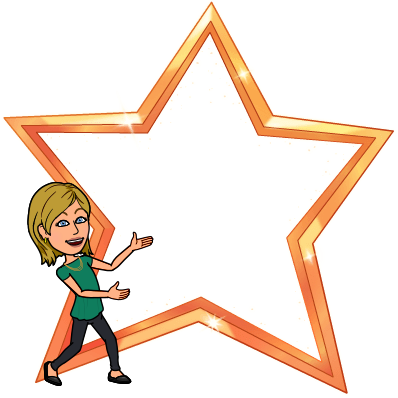