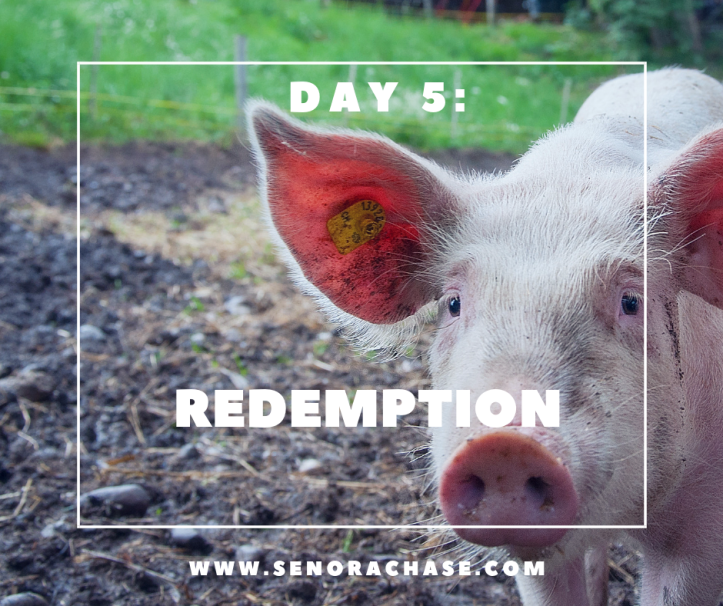 Jesus continued, “There was a man who had two songs. The younger one said to his father, ‘Father, give me my share of the estate’. So he divided his property between them.

Not long after that, the younger son got together all he had, set off for a distant country and there squandered his wealth in wild living.

After he had spent everything, there was a severe famine in that whole country and he began to be in need. So  he went and hired himself out to a citizen of that country, who sent him to his fields to feed pigs. He longed to fill his stomach with the pods that the pigs were eating, but no one gave him anything.

When he came to his senses, he said, ‘How many of my father’s hired servants have food to spare, and here I am starving to death! I will set out and go back to my father and will say to him: Father, I have sinned against heaven and against you. I am no longer worthy to to be called your son; make me like one of your hired servants’  So he got up and went to his father.

But while he was still a long way off, his father saw him and was filled with compassion for him; he ran to his son, threw his arms around him and kissed him.

The son said, ‘Father, I have sinned against heaven and against you. I am no longer worth to be called your son’.

But the father said to his servants, ‘Quick! Bring the best robe and put it on him, Put a ring on his finger and sandals on his feet. Bring the fattened calf and kill it. Let’s have a feast and celebrate. For this son of mine was dead and is alive again; he was lost and is found.’ So they began to celebrate.

Have you ever had students like the son? You know, kids who made a bad choice…maybe it was cheating on a test, maybe it was fighting or swearing or doing drugs in the bathroom. The son essentially gave the middle finger to his father and walked out. You’ve taught students like that, right? Kids who have said hurtful things or been disrespectful or threatened you.  (You can tell I teach high school, can’t you….maybe it looks different with the little ones, but you’ve taught those kids. You know who I’m talking about.)

Jesus uses stories to show us what God is like. And the father who welcomed back his son with open arms is what God is like…anxiously awaiting for his children to turn back to him. The son in the story came to his senses, he chose to go back home, not knowing what the consequences would be. For our naughty kiddos, they don’t choose to come back to class after a suspension or trip to the office…they have to. But we can respond like the father. We can welcome them back, give them a fresh start. We can show them the power of redemption.

Remember that verse a few days back… “Let your light shine before men that they may see your good deeds and praise your Father in heaven”? Here’s one of the ways we do it! We welcome them back, we’re genuinely happy to see them. We separate the bad choices from the kiddo and they get a do-over. We show them that despite what they’ve done, they’ve got someone in their corner, cheering them on.

There’s an outreach ministry for teenagers called Young Life that is very dear to my heart. (That’s where I first heard about Jesus then later became a volunteer leader and then worked on Young Life staff). In Young Life, one of their sayings during leader training is “Be Jesus with skin on”… for a lot of our kids, we’re the only Jesus our kids have experienced. Let’s show him what he’s like!

I have swept away your offenses like a cloud, your sins like the morning mist. Return to me, for I have redeemed you.

Did the Lord put any names on your heart, of little stinkers that need to be welcomed back into the family? If not…that might be a good one to pray about! And if you don’t have any stinkers, you will! Be proactive in your prayers!